Ring, 2FA, and a Win for Consumers

Today, Amazon announced that two-factor authentication (2FA) is now mandatory for all Ring users. In recent months, several stories have emerged about Ring users being hacked, harassed, and spied on. This extra layer of security will help prevent further episodes.

This is positive news for consumers — and proves that even the mightiest tech companies will respond to consumer pressure. We often feel helpless about the state of online privacy and security. But when a movement of consumers, nonprofits, and journalists reaches critical mass, we can push consumer tech in a better direction.

The change comes on the heels of loud advocacy by Ring users and organizations like Mozilla and Electronic Frontier Foundation (EFF). In December, Mozilla launched a petition urging Amazon to mandate 2FA for all Ring devices, and over 8,000 consumers signed on. Meanwhile, EFF revealed that Ring shares personal data with an array of third parties. (In today’s announcement, Ring also said it is pausing certain third-party tracking and allowing users to opt out of targeted ads.)

There’s a lot of work ahead of us — both in the industry at large, and with Ring specifically. For example, extensive reporting has highlighted concerns about Ring’s ongoing partnerships with police departments across the U.S., and the way in which its Neighbors app can stoke fear, paranoia, and over-policing. But today, we’re applauding Amazon and Ring for listening to consumers and prioritizing its customers’ security.

In recent weeks, stories about Amazon’s Ring products being hacked have dominated headlines. The connected doorbells, cameras, and microphones have been used to spy on and harass consumers.

Advocacy Dec. 13, 2019 Cyber criminals are breaking into Ring video cameras. Here’s what Amazon should do to stop it.

An eight-year-old girl heard strange noises coming from her bedroom. When she went to see what it was, she heard a man’s voice speaking to her through the Amazon Ring her parents had just installed in her room. 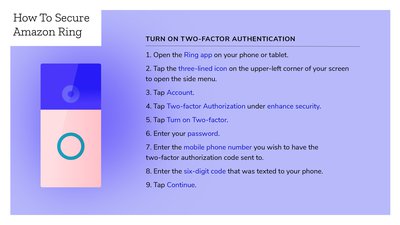 Advocacy Dec. 13, 2019 How to secure your Ring security camera (because Amazon won’t do it for you)