This October 2019, I had the distinct pleasure of attending the Mozilla Festival, hosted in London at Ravensbourne University, for the first time. After working at Mozilla as an emerging technology researcher, I had heard a lot about the event. Before attending, I asked my colleagues about their thoughts on previous years at MozFest, and no two experiences sounded alike. The most consistent advice I got before heading to London was “MozFest is what you make it.”

My nine days in London were jam-packed with learning about people, projects, and companies covering topics near and dear to my heart. Discussions centered around opportunities and challenges of the future in areas like misinformation, artificial intelligence (& machine learning), decentralization, diversity and inclusion, and IoT security. As if this wasn’t enough, the best part of Mozfest was the undercurrent of commitment - through every talk, exhibit, and workshop - to finding the best way to progress into the future of technology, and a willingness to take a step back and understand the bigger picture needed to get there.

I was lucky enough to lead a session during MozFest called Your Future, Decentralized. The 35-40 participants who attended my session made it the perfect size for the interactive format workshop. We started off with some introductions, and I presented a bit of background on the field of strategic foresight and how we use it at Mozilla. Not many participants had heard of strategic foresight per se, but they seemed to understand the signal gathering and forecasting that is the goal of the work. For those who might not be familiar, signal gathering is a foresight methodology that involves looking for and cataloging specific, observable instances of ideas in context. For example, signals could be a startup, initiative, art project, court case, or datapoint. This activity helps us start to tell a story about where the future might be headed, and through forecasting and analysis, develop scenarios to interact with when innovating.

After this overview, participants formed small groups to discuss what the terms decentralized and distributed meant to them. This was an important exercise because as I had wandered around MozFest activities the week before, it was clear that attendees came from many different how many backgrounds. There were technologists and researchers, and also advocates, lawyers, designers, and even election campaign managers. These varied backgrounds resulted in distinct understandings of the terms decentralized and distributed. Some attendees focused on technological architectures while others described distributed community structures, and the rest were somewhere in between.

We didn’t have a chance to share everyone’s thoughts - the question alone generated a lively discussion highlighting the challenge in finding a shared meaning for the terms. I shared the way that we tend to think about decentralized and distributed approaches at Mozilla:

Based on this conversation, an interesting follow up could be holding an online forum to identify a shared framework for talking about the many aspects of decentralization and distribution.

After our ground-setting discussion, I presented some examples of how Mozilla’s team in emerging technologies is exploring decentralized and distributed methods. This includes: building tools to support extensions, community building and advocacy, and experimenting with prototypes and user research. This gave the group a few examples of how to solve problems using these methods. I also presented opportunities for future development that have surfaced from the user research our team conducted throughout 2019. These opportunities, based on user needs and behaviors, served as prompts for groups of the session’s participants to identify consequences and places to take action. For the curious, here are the opportunities for change:

Then began the main activity of our session - futures wheels. A futures wheel is a decision making, strategy informing, foresight tool that helps stakeholders and innovators map out the effects of a potential change. It provides a way to systematically uncover first, second, and third order consequences, as well as the way these forces interrelate. Participants gathered into groups of 3-5 people to build a futures wheel around one of the opportunities for change I presented as an outcome from our user research.

Groups were free to choose whichever opportunity for change they preferred. Interestingly, out of the five categories, three groups of workshop attendees chose “Creator Support”, another three chose “Own your social”, and one chose “Indieweb takes over.” Once groups selected the future change of their choice, they were asked to complete the futures wheel by identifying first and second order consequences if that change were to occur. Then groups briefly discussed solutions - technical or otherwise - that would precipitate the change. Below is a quick look at ideas generated by our groups!

Overall, our workshop on Your Future, Decentralized was an excellent opportunity to share a bit of what we’re doing at Mozilla in Emerging Technologies using decentralized and distributed approaches. We were thrilled to be joined by such an engaged and diverse participation - it made the experience that much better!

If you want to join the conversation or learn more, please head over to our discourse page to see the full session outline and add your thoughts or questions: https://discourse.mozilla.org/t/your-future-decentralized/46633. You can also read more about decentralized and distributed technologies from our blog series on Mozilla Hacks here: https://hacks.mozilla.org/category/dweb/. Check out and participate in the indieweb community to start building your distributed persona on the web: https://indieweb.org/. Looking forward to continuing the conversations started in London.

Blog written by Nicole Shadowen, Technical Research Analyst in Emerging Technologies at Mozilla. Please contact Nicole at nshadowen@mozilla.com with any additional thoughts, comments, or questions on this topic. Thanks! 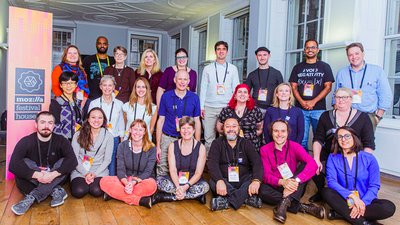