The Making of MozFest

If you’ve been to MozFest before, you know it’s different from other conferences. If you haven’t… well, it’s hard to describe the whirl of people and ideas, those sparks of curiosity and connection, and the vibe — that buzzing, dynamic, positive energy. You can feel it spilling out of sessions into hallways and stairwells, fueling lunchtime conversations and late night karaoke adventures, propelling participants from session to session and floor to floor on a madcap journey of discovery and invention.

So how does MozFest manage to capture this incredible energy, year after year? (And no, it’s not just a result of the copious free coffee.) It’s a product of a unique process for creating an event — — rooted in shared ownership, community-driven design, and open practice.

While Mozilla provides a basic structure, resources, and support, the Festival is essentially designed and produced by volunteers — teams of educators, activists, engineers, artists, and researchers who care about the open web and a healthy internet. These volunteers (called “Wranglers”) develop the festival narrative, curate sessions, coach facilitators, design the spaces and experiences, and pull it all together on-site in London.

“The festival is about people being able to connect and create together,” says Festival Director Sarah Allen. ”Without collaboration we wouldn’t have MozFest. It’s in everything we do, and it starts with the Wranglers.”

It’s a pretty risky prospect — imagine the most important event of your org’s calendar year, with thousands of attendees and no small investment of resources. Now imagine handing the keys to that event over to a team of volunteers.

But the result, described by long-time festival co-designer Allen Gunn, of Aspiration, is: “Loving, creative chaos.” This process has been evolving for some years, since Mozilla shifted from trying to convince communities to take on the organization’s agenda, Allen says, to learning how to reflect what those communities want in a convening.

And those communities always bring amazing, unexpected ideas and experiences to the festival. At the 2018 MozFest, the space exploring a decentralized internet was reimagined as the futuristic nation of Xenshana, where principles of cooperation and consensus reign. In a live-action role playing game experience unfolding across the festival, players explore online tracking, personal privacy, data protection. And in 2018 a new Queering MozFest experience features a geodesic dome housing workshops, live theater experiences, art and glitter.

Sarah Allen and Allen Gunn have come to refer to the process as “federated design.” It begins in early Spring with Wrangler teams from around the world coming together at MozRetreat for week of activities, experience, and design workshop set in a location chosen to spark creativity and inspiration. In 2018, Wranglers gathered in Eindhoven, a small city in the Netherlands that’s steeped in design, technology, and innovation. It’s home to the acclaimed Eindhoven Design Academy; the Van Abbe Museum, one of the first public museums of contemporary art in Europe; and the Philips corporation, an early innovator in light bulbs, vacuum tubes, and radio technology. Group activities were as varied as art and design studio visits, a bike tours of the city, and a collaborative embroidery session.

Sarah Allen says “The aim of MozRetreat is to explore why the wranglers are choosing to do this project — to give up six months of their time — why they want the Festival to succeed. And then we give them space to design something that’s reflective of them, their work, their communities. From then on, it’s not about Mozilla wants, it’s about what this particular group is going to create.”

The Wranglers use their MozRetreat experiences and conversations to shape their own narratives around one of the internet health issues. And facilitators — from all around the world, with varied skills and expertise — propose sessions that respond to that narrative, building out what Sarah Allen calls the “storyboard” of the Festival. On MozFest weekend those sessions become interactive, creative, and hands-on experiences where participants add their own ideas, insights, questions, and solutions.

The collaboration happens on all levels, a story told across communities, disciplines, cultures, and age groups.“Everybody plays the role in the success of the festival — it’s not just a small group of people sitting around a table, making decisions behind closed doors,” says Sarah Allen.

Unlike most other conferences, anyone can lead a session at MozFest. It’s not restricted to those with name recognition or special credentials. “We do have experts that come to MozFest, but that’s not a prerequisite to lead a session — you just have to be passionate about that topic,” says Sarah Allen. “If you have a great idea and a good participatory element in the session proposal, if there’s a way that MozFest attendees can help you move your project or idea forward — we’re willing to consider that session.”

None of this, of course, is easy. Collaborative practice takes time, patience, and an ability to be truly open to feedback from all directions. Says Sarah Allen : “It’s always evolving. We are always looking to make the program better — from the retreat and wrangler experience to the volunteers to our production process — we look for feedback from everyone involved.”

“We blow it up every year. We don’t copy-paste last year’s agenda, and that takes real effort,” says Allen Gunn. Not settling into a groove keeps the event fresh, but burnout is always a risk. In collaboration with Dirk Slater from capacity building consultancy FabRiders, Mozilla provides lots of coaching and support to Wrangler teams as well as session leads, and encourages these groups to share best practices and learning with each other. This interlinked support system helps prevent burnout, despite the Festival’s annual reboot.

MozFest is a space for new and emerging leaders to develop and grow — and it’s expected they’ll move on after their year or two of involvement, creating a temporary vacuum in leadership before others step in. While this can be challenging, the upside is that MozFest benefits from new thinking and perspectives each year.

Casting a wide net for participants and facilitators, building teams, letting the wranglers drive, designing for participation, acting on feedback — these are only part of the MozFest equation.

“The only reason this works because we validate experience and invite people to share. When your aim is to create empathy and understanding, when you’re designing for collective meaning and shared experience, loving outcomes are hard to avoid.” Allen Gunn explains.

Does your organization co-create events with communities? What are your learnings and challenges? Do you have questions for the teams of Wranglers and Mozilla staff that make MozFest happen? Comment below to join the conversation. 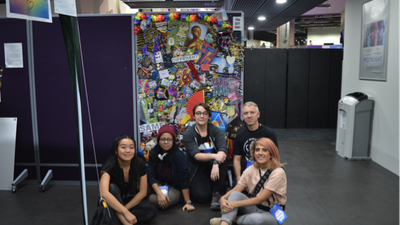 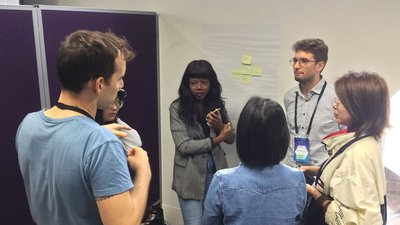